This new body of work, first shown at Contemporary Applied arts and the Ruthin Craft Centre celebrates Neil’s 30 years as a textile designer. 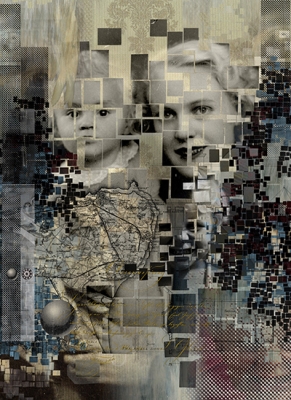 Neil’s fascinating textile hangings are inspired by family photographs, a sense of time passing and how we remember things – in both real and false memories. The textile prints are accompanied by personal, sentimental objects that were the starting point for many of the stories Neil is telling.

For many years his scarves, ties and cushions sold to the best stores across the world: Liberty, Fortnum & Mason, Harrods and Neiman Marcus in the USA.

In 1990 Neil won the New Designers Textile Prize, and never looked back, his work is now held in collections around the world including the V&A, The Cooper Hewitt Museum in New York and The Crafts Council Collection in London.

Neil moved gradually into teaching and now heads up the Department of Fashion Textiles at University for the Creative Arts.

This allows him freedom from the constraints of accessory production that he established his name with. He was one of the first designer-makers to start to work with computers as his main medium. His textiles are now all digitally printed, with occasional added screen print and stitch.