Although now remembered mostly for his novels, it has been argued that Dickens was foremost a man of the theatre. As a child Charles Dickens saw Grimaldi in London, and later recalled seeing Richard the Third and Macbeth at the Rochester Theatre on Star Hill.

Many years later, Dickens returned to the theatre and recorded his experiences in The Uncommercial Traveller (c.1860). By the time of his visit, the theatre was in decline and never recovered, with the last performance taking place on 11 March 1884.

"The Theatre was in existence, I found, on asking the fishmonger, who had a compact show of stock in his window, consisting of a sole and a quart of shrimps - and I resolved to comfort my mind by going to look at it... To the Theatre, therefore, I repaired for consolation. But I found very little, for it was in a bad and declining way. A dealer in wine and bottled beer had already squeezed his trade into the box-office, and the theatrical money was taken - when it came - in a kind of meat-safe in the passage… It was To Let, and hopelessly so, for its old purposes; and there had been no entertainment within its walls for a long time except a Panorama... No, there was no comfort in the Theatre. It was mysteriously gone, like my own youth. Unlike my own youth, it might be coming back some day; but there was little promise of it." 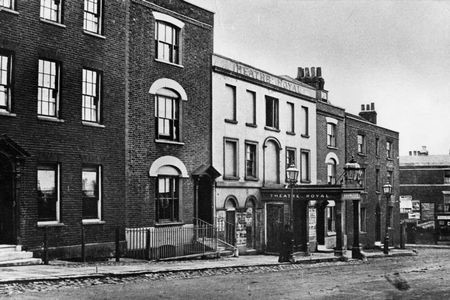