Charles Dickens wrote Great Expectations during his time at Gad’s Hill. Much of the topography of the book is thought to have been based on the marsh country and villages of the surrounding area. The walk from Higham to Cooling was one of Dickens’ favourites:

in the late year or winter, when from Higham he could get to it across country over the stubble fields.
(The Life of Charles Dickens by John Forster)

Dickens would often take friends to Cooling churchyard to show them the small tombstones of the children of the Comport family of Cooling Castle.

As I never saw my father or my mother, and never saw any likeness of them, my first fancies regarding what they were like, were unreasonably derived from their tombstones. The shape of the letters on my father’s, gave me an odd idea that he was a square, stout, dark man, with curly black hair. From the character and turn of the inscription, ‘Also Georgiana Wife of the above’, I drew a childish conclusion that my mother was freckled and sickly. To the five little stone lozenges, each about a foot and a half long which were arranged in a neat row beside the grave, were sacred to the memory of five little brothers of mine– who gave up trying to get a living exceedingly early in that universal struggle.
(Great Expectations chapter 1 - Philip Pirrip (Pip)) 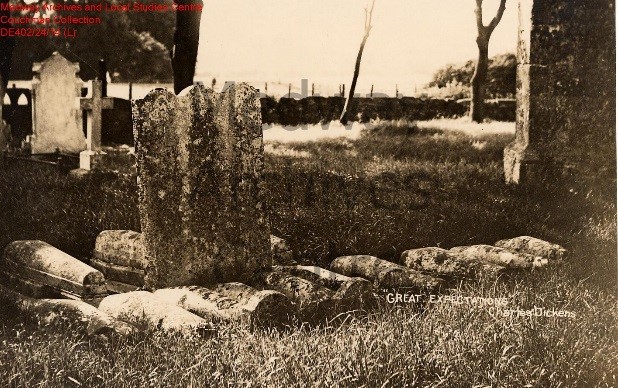