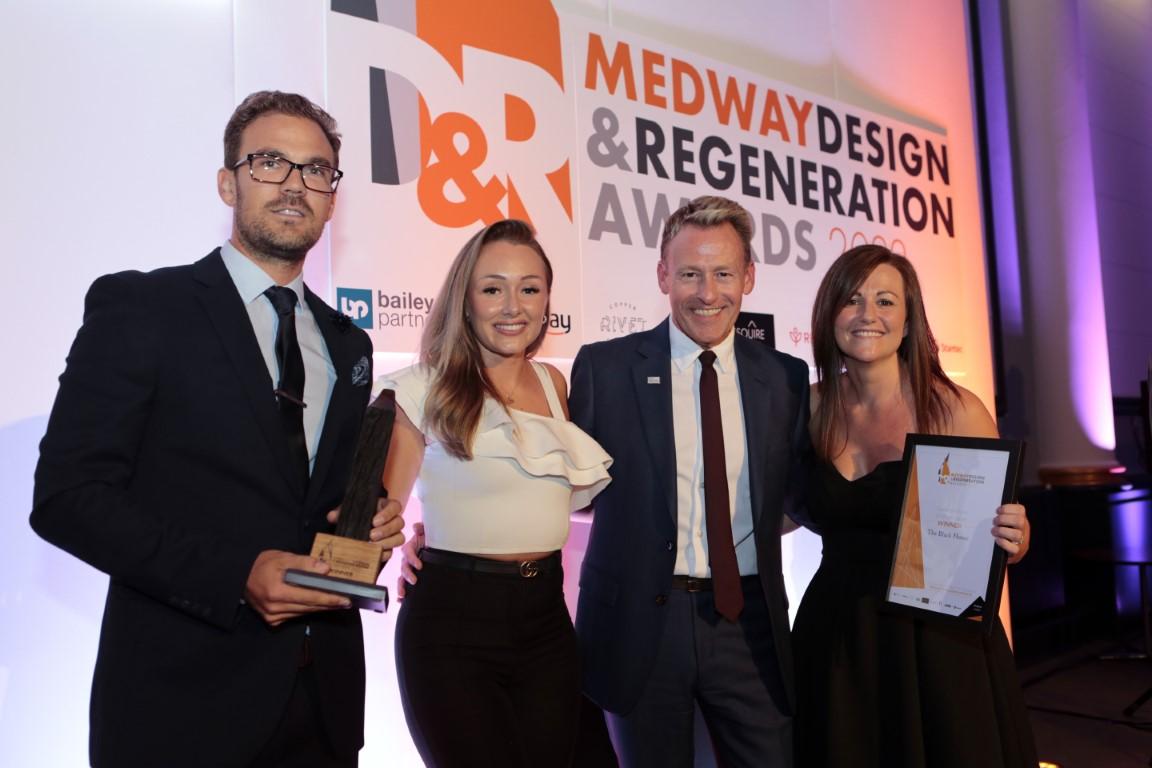 The Black House won 2 awards at the Medway Design and Regeneration Awards.

Winners of the Medway Design and Regeneration Awards 2022 were announced at an awards ceremony on 22 September 2022 at The Rochester Corn Exchange.

Find out the winner by category:

The judges considered this to be a phenomenal development daringly relocating and meticulously restoring a historically important building.

To complement its arresting new wing, the special character of the former pig shed has been protected and respectfully extended. Together they form an extraordinary new family home, whilst also appropriately splitting the garden.

They felt that the marriage between the old and new was superb, seamlessly integrated with great attention to detail. Modest yet distinguished, the project is an impressive labour of love in architectural form - an essay in thoughtfulness and design. Every detail has been meticulously considered and exquisitely finished, resulting in a truly remarkable home that enhances its natural setting.

The judges felt the owner/developer should be commended for his passion and commitment to the well-considered external preservation of the theatre.

The judges applauded the aspirations of this scheme, delivering 100% affordable housing on a difficult site, highlighting the benefits of modular housing.

The new set of family homes brings benefits for the wider community and addresses existing anti-social and security issues. It projects its optimism, whilst managing to feel neighbourly.

While not flawless, the judges felt the scheme has largely delivered on its aspirations and the faults could be resolved readily through improved maintenance and the potential inclusion of a pocket park.

The judges considered that this is an organic and characterful development, which is playful and joyful in its layout, form, variety and design.

The layout has been moulded to create a strong sense of character, is confident in its design and emphasises the importance of open space, healthy living, with play and children at the heart of its community.

The judges commended the mixed-use nature of the development for this village location, delivering high-quality buildings for this new community. This includes a nursery and a commercial ‘barn’. The materiality narrative, form, scale and design are reflective of the context and its locality, representing Kent rural vernacular.

The judges were impressed by the vision and achievements of this project on a limited budget.

This school project makes successful use of the site, an excellent relationship between the school, the farm, open space and housing. They recognised that the internal design of the school is flexible and spacious with a well organised layout. It has clearly been designed to meet the needs of the children, demonstrating the importance of engaging with a head teacher and staff who fully understand the needs of the pupils.

They also felt the farm was visionary and inspiring, as well as having the benefit of availability to primary schools throughout Medway and Kent, positively influencing teaching methods within the school and its wider community.

Civil and Infrastructure, including Public Realm

The judges liked the way the scheme has been designed to celebrate the importance and character of the church at night. This emphasises its presence as a community building serving the area.

The scheme is simple and carefully thought through and by improving safety is also delivering community benefits.

The judges considered the regeneration impact of this development to be significant and recognised the efforts of the owner in terms of delivery of a significant mixed-use scheme with no outside funding to assist.

They were impressed by the number of buildings that have been retained and re-used and the varied mix of uses that are now within the site.

The judges were very impressed by the conversion of this important and prominent building and its use as a boutique hotel, restaurant and wedding venue in an incredible setting.

The judges considered this to be an incredibly sensitive and daring restoration of a building that could so easily have been lost if it had not been for the current owners.

In an extraordinary labour of love, the owners have carefully taken apart the building to relocate and restore its setting in relation to the road, then meticulously put back the building. The owners then have had the confidence to undertake a new build, working collaboratively with Heritage England and the Conservation Officer at Medway, forming a respectful design that skilfully fuses together the old with the new.

The new build defers to and enhances the listed building, both crafted with a careful attention to detail. This exemplar project celebrates the meticulous work that goes into renovating and restoring historically significant buildings while retaining their original character.

The judges considered that the work undertaken in the restoration and characterful conservation of the former archdeacon building was remarkable.

The judges considered that while it is wonderful that the whole Magazine B had been converted into business units, the internal conversion of unit 1 in particular, by bespoke brick company, is of special merit and deserved applauding for its sensitivity to the materiality and respect to its previous use.

More about the winners

Read more about this year's winners in our press release.